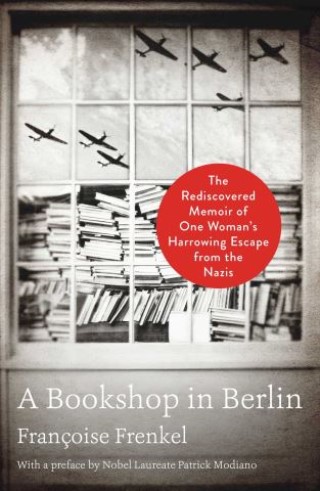 A Bookshop in Berlin

The Rediscovered Memoir of One Woman's Harrowing Escape from the Nazis

“A haunting tribute to survivors and those lost forever—and a reminder, in our own troubled era, never to forget.” —People

An “exceptional” (The Wall Street Journal) and “poignant” (The New York Times) book in the tradition of rediscovered works like Suite Française and The Nazi Officer’s Wife, the powerful memoir of a fearless Jewish bookseller on a harrowing fight for survival across Nazi-occupied Europe.

Françoise’s dream finally shatters on Kristallnacht in November 1938, as hundreds of Jewish shops and businesses are destroyed. La Maison du Livre is miraculously spared, but fear of persecution eventually forces Françoise on a desperate, lonely flight to Paris. When the city is bombed, she seeks refuge across southern France, witnessing countless horrors: children torn from their parents, mothers throwing themselves under buses. Secreted away from one safe house to the next, Françoise survives at the heroic hands of strangers risking their lives to protect her.

Published quietly in 1945, then rediscovered nearly sixty years later in an attic, A Bookshop in Berlin is a remarkable story of survival and resilience, of human cruelty and human spirit. In the tradition of Suite Française and The Nazi Officer’s Wife, this book is the tale of a fearless woman whose lust for life and literature refuses to leave her, even in her darkest hours.

Françoise Frenkel: Françoise Frenkel was born in Poland in 1889. Fulfilling a lifelong dream, she opened the first French-language bookshop in Berlin with her husband. In the summer of 1939, with war looming, Frenkel fled to Paris. She sought refuge across occupied France for the next several years until finally escaping across the border to Switzerland, where she wrote a memoir documenting her refugee experience. Her memoir, originally published in 1945 as Rien où poser sa tête (No Place to Lay One’s Head), was rediscovered in an attic in southern France in 2010 and republished in the original French as well as in a dozen other languages. This is its first publication in the United States. Frenkel died in Nice in 1975.