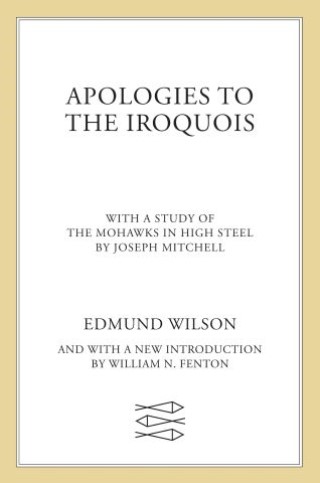 Apologies to the Iroquois

Edmund Wilson's personal and informative study on the plight of the Native American Indians, Apologies to the Iroquois

As Wilson writes, “[In August 1975] I discovered in the New York Times what seemed to me a very queer story. A band of Mohawk Indians, under the leadership of a chief called Standing Arrow, had moved in on some land on Schoharie Creek, a little river that flows into the Mohawk not far from Amsterdam, New York, and established a settlement there. Their claim was that the land they were occupying had been assigned them by the United States in a treaty of 1784. The Times ran a map of the tract which had at that time been recognized by our government as the territory of the Iroquois people, who included the Mohawks, the Senecas, the Onondagas, the Oneidas, the Cayugas and the Tuscaroras, and were known as the Six Nations. The tract was sixty miles wide, and it extended almost from Buffalo to Albany.

"I had already known about this agreement as the Treaty of Fort Stanwix (now Rome, New York), which had first made it possible for white people to settle in upper New York State without danger of molestation by its original inhabitants; but I had not known what the terms of this treaty were, and I was surprised to discover that my property, acquired at the end of the eighteenth century by the family from which it had come to me, seemed to lie either inside or just outside the northern boundary. Having thus been brought to realize my ignorance of our local relations with the Indians and continuing to read in the papers of the insistence of Standing Arrow that the Mohawks had some legal right to the land on which they were camping, I paid a visit, in the middle of October, to their village on Schoharie Creek . . . .”

Edmund Wilson: Edmund Wilson (1895-1972) was a novelist, memoirist, playwright, journalist, poet, and editor but it is as a literary critic that he is most highly regarded. His more than twenty books include Axel’s Castle, Patriotic Gore, To the Finland Station, and Memoirs of Hecate County.