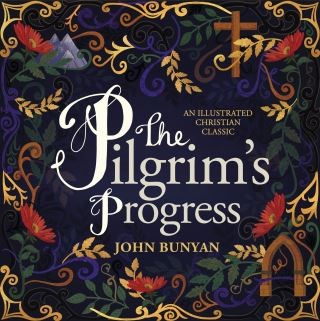 Striking hand-painted illustrations and enlightening commentary bring this masterpiece to life. Penned from Bunyan's jail cell, The Pilgrim's Progress evocatively depicts a story of struggle, perseverance, and faith. With annotations and art throughout, this edition invites you to discover anew the richness and nuance of this beloved classic.

Originally written for the everyman, John Bunyan's Christian classic has since found its way into the libraries of scholars and universities as well—a true masterpiece for the ages. Its historical richness, eloquent symbolism, and stunning prose have withstood the test of time, and this new edition helps readers appreciate the timeless beauty found in Bunyan’s words.

For longstanding fans of Bunyan's tale, or for those encountering it for the first time, this illustrated edition offers new beauty and insight. Fans of the text will love the gorgeous hand-painted scenes at the start of each chapter, and readers will gain a deeper understanding of the allegory from the annotations embedded across every chapter of this classic tale.

The Pilgrim's Progress has inspired readers across the centuries to persevere in their faith. Since its publication in 1678, this book has been translated into more than 200 languages. It's a worldwide bestseller, second only to the Bible, and it has become a hallmark among scholars and theologians around the globe. A staple for any home library!

John Bunyan was born in Elstow, Bedfordshire, England, in 1628. He learned to read and write at the village school and was prepared to follow his father's trade as a brazier when the English Civil War broke out in 1644 and he was drafted into the Parliamentary army. His military service brought him into contact with Oliver Cromwell's Puritan troops. Beginning in 1648, Bunyan suffered a crisis in religious faith that lasted for several years. He turned to the Nonconformist church in Bedford to sustain him during this period. His first writings were attacks against the Quakers. Then Charles II was restored to the throne and Bunyan was arrested for conducting services not in accordance with the Church of England. He spent 12 years in jail. During this time, he wrote his autobiography, Grace Abounding, in which he described his spiritual struggle and growth. During his last years in prison, Bunyan began his most famous work, The Pilgrim's Progress, a two-part allegorical tale of the character Christian and his journey to salvation. Part I was published in 1678 and Part II in 1684. The second part deals with the spiritual journey of Christian's wife and sons, as they follow in his footsteps. With its elements of the folktale tradition, The Pilgrim's Progress became popular immediately. Well into the nineteenth century it was a book known to almost every reader in England and New England, second in importance only to the Bible. Bunyan died in London on August 31, 1688.