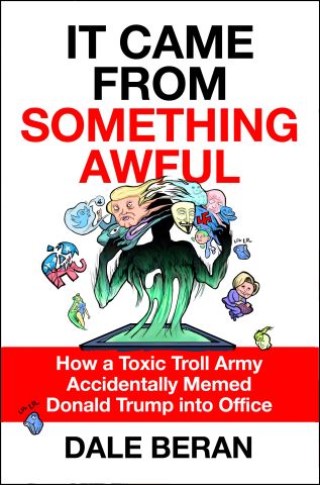 It Came from Something Awful

The internet has transformed the ways we think and act, and by consequence, our politics. The most impactful recent political movements on the far left and right started with massive online collectives of teenagers. Strangely, both movements began on the same website: an anime imageboard called 4chan.org. It Came from Something Awful is the fascinating and bizarre story of sites like 4chan and 8chan and their profound effect on youth counterculture.

Dale Beran has observed the anonymous messageboard community's shifting activities and interests since the beginning. Sites like 4chan and 8chan are microcosms of the internet itself—simultaneously at the vanguard of contemporary culture, politics, comedy and language, and a new low for all of the above. They were the original meme machines, mostly frequented by socially awkward and disenfranchised young men in search of a place to be alone together.

During the recession of the late 2000’s, the memes became political. 4chan was the online hub of a leftist hacker collective known as Anonymous and a prominent supporter of the Occupy Wall Street movement. But within a few short years, the site’s ideology spun on its axis; it became the birthplace and breeding ground of the alt-right. In It Came from Something Awful, Beran uses his insider’s knowledge and natural storytelling ability to chronicle 4chan's strange journey from creating rage-comics to inciting riots to—according to some—memeing Donald Trump into the White House.

Dale Beran: DALE BERAN is a writer and artist whose work has been published in McSweeney’s, Quartz, The Huffington Post, The Daily Dot, The Nib, and The Baltimore City Paper. His recent article on Medium, 4chan: The Skeleton Key to the Rise of Trump, became a sensation that was shared and recommended by JK Rowling and Marc Maron, among many others. He has a BA in classics from Bard and a JD from Fordham. He lives in Baltimore.