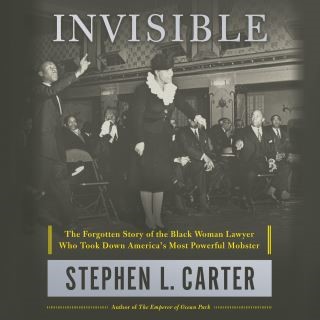 Bestselling author Stephen L. Carter delves into his past and retrieves the inspiring story of his grandmother’s extraordinary life.

She was black and a woman and a prosecutor, a graduate of Smith College and the granddaughter of slaves, as dazzlingly unlikely a combination as one could imagine in New York of the 1930s—and without the strategy she devised, Lucky Luciano, the most powerful Mafia boss in history, would never have been convicted. When special prosecutor Thomas E. Dewey selected twenty lawyers to help him clean up the city’s underworld, she was the only member of his team who was not a white male.

Eunice Hunton Carter, Stephen Carter’s grandmother, was raised in a world of stultifying expectations about race and gender, yet by the 1940s, her professional and political successes had made her one of the most famous black women in America. But her triumphs were shadowed by prejudice and tragedy. Greatly complicating her rise was her difficult relationship with her younger brother, Alphaeus, an avowed Communist who—together with his friend Dashiell Hammett—would go to prison during the McCarthy era. Yet she remained unbowed.

Moving, haunting, and as fast-paced as fiction, Invisible tells the true story of a woman who often found her path blocked by the social and political expectations of her time. But Eunice Carter never accepted defeat, and thanks to her grandson’s remarkable audiobook, her long forgotten story is once again visible.

Stephen L. Carter: Stephen L. Carter is the bestselling author of several novels—including The Emperor of Ocean Park and New England White—and over half a dozen works of non-fiction. Formerly a law clerk for Supreme Court Justice Thurgood Marshall, he is the William Nelson Cromwell Professor of Law at Yale University, where he has taught for more than thirty years. He and his wife live in Connecticut.Karen Chilton is a multi-talented author, actor, and audiobook narrator, as well as a freelance writer, script writer, and librettist. She wrote the biography Hazel Scott about the trailblazing jazz pianist and coauthored I Wish You Love with legendary jazz vocalist Gloria Lynne. Her acting credits include It's Kind of a Funny Story and Half Nelson. She won a New Professional Theatre Writers award for her play Convergence and an Audiofile Golden Earphones Award for her narration of Karolyn Smardz Frost's I've Got a Home in Glory Land. She has also narrated Michelle Alexander's The New Jim Crow and Jennifer Berry Hawes' Grace Will Lead Us Home: The Charleston Church Massacre and the Hard, Inspiring Journey to Forgiveness.